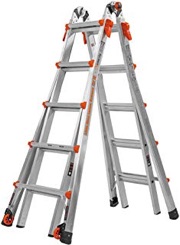 Building a “CD ladder” means funding a combination of certificates of deposit (CDs) with different maturities so that you have always have a portion of your funds maturing soon (providing liquidity) but you also increase your interest rates (more $$$). Here are two common CD ladder types:

Fidelity has a where they will build a CD automatically for you using brokered CDs from their inventory. They will even re-invest, or “Auto Roll”, your maturing funds into a new rung if you wish. The service itself is free, but the CD rates aren’t necessarily the absolute highest available, especially when you include credit unions.

Alternatively, you could move around your own funds and build your own ladder (DIY) using certificates from various banks and credit unions. Finally, you could also buy Treasury bill and bonds of similar maturities, as they are also backed by the government so you can be confident that you’ll get your principal back.

I decided to run a quick survey today (February 13, 2019) to see what your average interest rates would be for the three different methods:

(Fidelity CDs were issued by State Bank of India, Morgan Stanley, and Goldman Sachs. DIY banks used in this comparison are Ally Bank/Limelight Bank, NASA FCU, and Georgia Banking Company. Rates as of 2/13/19.)

Right now, Treasury bonds don’t really offer much of a premium above the top DIY CD rates in this scenario. Even if you had state income tax of 10%, your effective average APY would still only be about 2.8%. That is about break-even with the Fidelity automatic service.

This is one reason why I track the .

“The editorial content here is not provided by any of the companies mentioned, and has not been reviewed, approved or otherwise endorsed by any of these entities. Opinions expressed here are the author’s alone.”