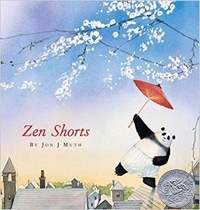 Reading children’s books to my kids has become a regular source of new wisdom. I guess that’s not surprising, if the goal is to teach kids about life. Here’s one that came across recently and keeps popping back in my head.

I first read it in the children’s book by Jon J. Muth (Caldecott Honor book). There are many variations of it online, and it may be credited as a Chinese, Buddhist, Taoist, or Zen parable. Here’s a brief version from :

There is a Taoist story of an old farmer who had worked his crops for many years. One day his horse ran away. Upon hearing the news, his neighbors came to visit. “Such bad luck,” they said sympathetically. “Maybe,” the farmer replied.

The next morning the horse returned, bringing with it three other wild horses. “How wonderful,” the neighbors exclaimed. “Maybe,” replied the old man.

The following day, his son tried to ride one of the untamed horses, was thrown, and broke his leg. The neighbors again came to offer their sympathy on his misfortune. “Maybe,” answered the farmer.

The day after, military officials came to the village to draft young men into the army. Seeing that the son’s leg was broken, they passed him by. The neighbors congratulated the farmer on how well things had turned out. “Maybe,” said the farmer.

I enjoy the sound of Alan Watts’ voice, so I am also embedding this :

I still have a hard time applying this parable in real-time, but it does help me after some time passes. This parable is also tricky because you have to remember both when life puts up a roadblock and when you receive an unexpected windfall.