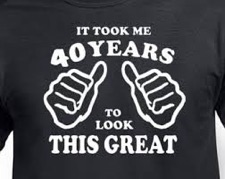 I’m turning 40 years old this summer. This number has always been a psychological marker for me. I’ve always wanted to be financially secure and have started a family by age 40. According to this by Daniel Pink*, I’m far from the only one. Consider marathons:

Four people in four different professions living in four different parts of the world, all united by the common quest to run 26.2 miles. But something else links these runners and legions of other first-time marathoners. Red Hong Yi ran her first marathon when she was 29 years old. Jeremy Medding ran his when he was 39. Cindy Bishop ran her first marathon at age 49, Andy Morozovsky at age 59.

The article contains several other insights that definitely applied to me. According to Alter and Hershfield:

“People are more apt to evaluate their lives as a chronological decade ends than they are at other times,” Alter and Hershfield explain. “Nine-enders are particularly preoccupied with aging and meaningfulness, which is linked to a rise in behaviors that suggest a search for or crisis of meaning.”

According to psychologist Clark Hull:

You could tell yourself that being 29 is no different than being 28 or 30, or you can just use this behavioral quirk to reach your goals. I’ve been working on “closing the gap” in terms of getting all my financial affairs in order. Here are all the things that I’ve been working on as a 39-year-old:

Everything on this list was being putting off because it was unpleasant. Most either dealt with the prospect of early death/severe disability, or annoying paperwork. The prospect of turning 40 got me over the hump. Next decade: Marathon at age 49?

* The article is actually an excerpt from his new book .