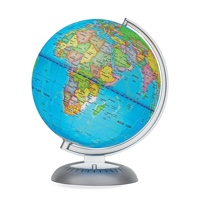 When you’re deciding where to invest your money, a good starting point is to consider every single business that you can invest in around the world. I still find it amazing that with a few clicks, you can own a share of Alibaba in China, Nestle from Switzerland, and Apple in the US.

Inside a post about investing in Emerging Markets stocks at , I came across this chart that tracks how all the investable stocks in the world could be broken down by total value (“market cap”) between the US, non-US Developed Markets, and Emerging Markets since 1990 (click to enlarge):

How much international stocks should you own? There is not a consensus amongst “experts” as to the optimal ratio, but I personally don’t deviate from this breakdown very much. My has been set at 50% US and 50% non-US (including both Developed and Emerging Markets) for a while. Vanguard and Fidelity, which manage huge retirement funds, have settled on something closer to 70% US and the rest international.

Keep in mind that investable value is not the same as gross domestic product (GDP). China’s GDP is roughly 60% that of the US, but the total investable business value in China only makes up about 5.5% that of the US (about the same as Canada). Foreigners can’t invest in every public business in every country, and many countries don’t have stable public markets in the first place. In many ways, 50% US might even be too little if you really wanted to track the world’s business value.

Again, I go back to the classic Jack Bogle quote: “Don’t look for the needle in the haystack. Just buy the haystack.” I don’t know which companies will be the most successful in the future, or in which country they will be located. If it’s in the US, I will own them. If it’s not, I will hopefully own them as well. I hope that stable and transparent equity markets spread across the globe over time. I just want to sit back as a part-owner and earn a share of the profits.

If you care about valuations, you are probably aware that right now the US is “expensive” based on historical prices. Emerging Markets and Developed non-US are “cheaper”. But as usual, that is because US businesses are making lots of money (especially after tax cuts) and look strong, while the rest of the world has struggled on relative basis. Cheaper valuations could be taken as another reason to at least invest some of your holdings into international stocks.