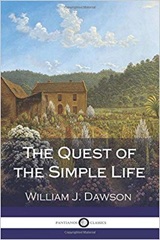 by William J. Dawson was published over 100 years ago; it’s so old that the copyright has expired, making the book public domain (and thus available as a free Kindle download). Yet, other than the old-fashioned writing style that required regular dictionary usage, much of the contents are perfectly applicable today! Here are some excerpts to help prove my point, and at the end I compare 1907 vs. 2018. (Any bolded parts are my doing.)

On the feeling that your family time is lacking:

Let us take the life of the average business man by way of example. Such a man will rise early, sleep late, and eat the bread of carefulness, if he means to succeed. His children scarcely know him; they are asleep when he goes off in the morning, and asleep when he returns at night; he is to them the strange man who sits at the head of the table once a week and carves the Sunday joint. It is well for them if they have a mother who possesses gifts of government, sympathy, and patient comprehension, for it is clear that they have no father. He gets a living, and perhaps in time an ample living; but does he live?

On the true cost of “Keeping up appearances”:

Money may be bought at too dear a rate. The average citizen, if he did but know it, is always buying money too dear. He earns, let us say, four hundred pounds a year; but the larger proportion of this sum goes in what is called ‘keeping up appearances.’ He must live in a house at a certain rental; by the time that his rates and taxes are paid he finds one-eighth of his income at least has gone to provide a shelter for his head. A cottage, at ten pounds a year, would have served him better, and would have been equally commodious. He must needs send his children to some private ‘academy’ for education, getting only bad education and high charges for his pains; a village board-school at twopence a week would have offered undeniable advantages. He must wear the black coat and top-hat sacred to the clerking tribe; a tweed suit and cap are more comfortable, and half the price. At all points he is the slave of convention, and he pays a price for his convention out of all proportion to its value. At a moderate estimate half the daily expenditure of London is a sacrifice to the convention or imposture of respectability.

On the cost of commuting and eating out:

In all but very fine weather I must needs use some means of public conveyance every day; there was a daily lunch to be provided; and when work kept me late at the office there was tea as well. One can lunch comfortably on a shilling or eighteenpence a day; and I knew places where I could have lunched for much less, but they were in parts of the town which I could not reach in the brief time at my disposal. Moreover, one must needs be the slave of etiquette even though he be a clerk, and if all the staff of an office frequent a certain restaurant, one must perforce fall into line with them under penalty of social ostracism. Thus, whether I liked it or not, for five days in the week I had to spend eighteenpence a day for lunch, and fourpence for teas; and if we add those small gratuities which the poorest men take it as a point of honour to observe, here was an annual expenditure of 25 pounds.

Various quotes about those who feel this certain type of “discontent”:

The debate went on for years, and it was ended only when I applied to it one fixed and reasoned principle. That principle was that my first business as a rational creature was not to get a living but to live; and that I was a fool to sacrifice the power of living in securing the means of life. […]

My chief occupation through these years was to keep my discontent alive. Satisfaction is the death of progress, and I knew well that if I once acquiesced entirely in the conditions of my life, my fate was sealed. […]

To the man who detests the nature of his employment as I detested mine, I would say at once, either conquer your detestation or change your work. Work that is not genuinely loved cannot possibly be done well. […]

On looking back having lived his new simpler life successfully for four years:

After four years’ experiment in Quest of the Simple Life I am in a position to state certain conclusions, which are sufficiently authoritative with me to suggest that they may have some weight with my readers. These conclusions I will briefly recapitulate. The chief discovery which I have made is that man may lead a perfectly honourable, sufficing, and even joyous existence upon a very small income. Money plays a part in human existence much less important than we suppose. The best boon that money can bestow upon us is independence. How much money do we need to secure independence? That must depend on the nature of our wants.

Honestly, after finishing the book I was suspicious that it was written as some sort of strange parody, as some of the themes were so similar to what folks face today. But William James Dawson appears legit and wrote several during the same period. Here’s a comparison between Dawson in 1907 vs. a hypothetical person in 2018:

1907: The author worked full-time as a clerk in London, but finds himself dissatisfied with that lifestyle. He worked long hours, didn’t enjoy his desk job, and felt his health suffering in the sooty city air. He calculated that much of his expenses went to simply keeping up everyone else: higher rent, high commuting costs (time and money), paying extra to eat out with coworkers at lunch, maintaining a proper work wardrobe, and so on. He dreamed of a simple rural life. He found a small cottage in the countryside with very low rent. He fished, hunted, and farmed much of his food and paid for the rest with his earnings as a freelance writer for a local newspaper.

2018: A young woman works full-time in a large urban metro, but finds herself dissatisfied with that lifestyle. She worked long hours, didn’t enjoy her desk job, and felt her health suffering due to sitting in front of a computer all day. She calculates that much of her expenses went to simply keeping up everyone else: higher rent, high commuting costs (time and money), paying extra to eat out with coworkers at lunch, maintaining a proper work wardrobe, and so on. She dreamed of a simpler life. A small (tiny?) house or RV on a cheap piece of land. She gained income from her investments, including a rental property (Airbnb?) and stock dividends. The rest was covered with freelance work through Upwork or Elance.

Bottom line. In some ways, life hasn’t changed much in the last 100 years. Some folks will become unsatisfied enough with the commonly chosen path and take the risk of making huge changes. A simpler life with lower costs but more time with friends and family. This doesn’t necessarily mean they have the money for full “financial independence” yet, but perhaps a job more aligned with your true values where you aren’t solely maximizing income.