What Happens If You Run Out of Money in Retirement? 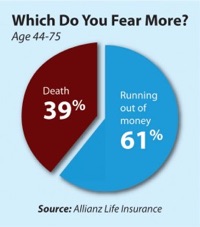 This is not a happy post, but it’s also the reality for a lot of people so I think it is a valid discussion. The Early Retirement forums had a thread recently titled :

I’m wondering–what would happen to someone who literally ran out of money before they died? I mean, if someone is in their 80s and penniless, would society really let them just die in their home? […] Does anybody actually know anybody who ran out of money after they retired because they didn’t save enough?

As you can see in the pie chart, an Allianz Insurance survey found that 61% of the Baby Boomer generation feared outliving their money more than they feared their own death ().

My answer is yes, I know someone who essentially ran out of money in retirement. The person was an older, single female coworker who retired right when I started working. While I don’t know her entire life story, she did not have any sort of savings when her job ended. Without a pension, 401k, or individual savings, her sole source of income was Social Security of about $1,000 a month. (Now that I know the terminology, maybe there was SSI.) She was forced to sell most of her things and relocate to a cheap part of Florida (warmer weather, no state income taxes) and move into a mobile home where the rent was under $500 a month. It had a name like “Sunny Gardens”, and while she wasn’t starving or homeless, it was a very precarious lifestyle. Many of her neighbors were in a similar situation.

This Atlantic article tells pretty much the same story.

I was going to say “No, society wouldn’t just let them die” but then I read the stat that nearly half of all single homeless adults were aged 50 and older in 2016, as compared to 11 percent in 1990. There is a social safety net as described above, but that net has holes.

In terms of public policy, it remains quite a challenge to design a better social safety net that people think is fair, compassionate, and not open to abuse. I root for the people fighting that fight. Some people have overcome struggles that I can’t even fathom, and I try to avoid making judgments on others without knowing the entire picture. At the same time, I also think it’s important to keep believing that our individual actions matter. All we can do is play our best with the cards we were dealt. (And maybe help others out based on our own abilities.)