What Percentage of Income Do People Really Donate to Charity? 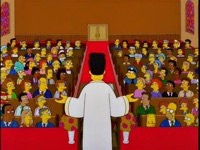 Giving to charity has the double taboo of being both about money and your generosity to others. Double the chance for judgment, at least!

“And once again, tithing is 10 percent off the top, that’s gross income, not net. Please people, don’t force us to audit.” -Rev. Lovejoy, The Simpsons

How much do people really give to charity? Since nobody talks about it, I had no idea until I read this NBER paper by Meer and Priday. The authors examined the , the “longest running longitudinal household survey in the world” with data from over 10,000 US households between 2001 and 2017. This summarized the results into a nice chart (click to enlarge):

People across all income levels gave between 1% and 2% of their incomes to charity on average, after adjusting for effect of outliers. This is not to say that this number is the “right” amount to give for any specific household. The paper argues that previous studies which found lower-income households gave a higher percentage than higher-income households were skewed due to outliers (older households with temporarily low incomes but high net worth), and so they used the statistical method of “windsoring” to adjust for extreme outliers.