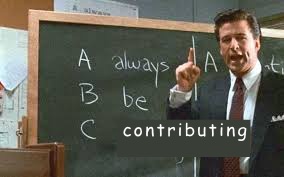 Like many others, I had a vague goal of $1 million net worth in my 20s. It’s easy to find a theoretical path a million. For example, $750 per month earning 8% returns for 30 years with get you there. Doing the actual earning, saving and investing is the hard part. It gets even harder during a bear market when your money feels like it is burning up in flames.

On the list of “Things I Would Tell My Younger Self”, I would include “Be patient and keep saving. You’ll get there.” Or by changing up the phrase “Always Be Closing” popularized in Glengarry Glen Ross – “Always Be Contributing” (ABC). One of the major benefits of writing this blog was keeping my focus on this path.

This is how a real couple could have gone from zero to $1 million from 2004 to 2017. My spouse and I both had our first full year of full-time jobs in 2004. From 2004 to 2017, we contributed the maximum allowable limit to both of our 401k and IRAs each year. The contribution limits rose gradually over the years. (Company match is not included here.) We invested our money in low-cost index Vanguard funds – mostly stocks with a little bonds – which can be closely approximated by the (ticker VTIVX). This fund had its share of ups and downs with the market. It crashed a lot in 2008 and 2009. It went back up a lot afterward. We just kept contributing and buying each year.

These numbers won’t be the same across other time periods, but they do represent a real-world experience. I’ve done a variation of this before in .

According to , 13% of their plan participants maxed out their 401k plans in 2017. 58% of participants had their entire account balance invested in a single target-date fund or similar managed allocation.

Bottom line. A real couple that started saving as 26-year-olds in 2004 and maxing out both their 401k and IRA plans each year could have reached $1 million by age 40 in 2018. All with a simple Vanguard Target Retirement index fund. This requires a lot of steady saving, but the important part is that it required no special investment skill. You didn’t need to recognize bubbles. You didn’t need to time bottoms. You didn’t need a fancy asset allocation, estimate future cashflows, understand price/book ratios, or even rebalance. Always be contributing.